Similarities and Differences
of Roman and United States Citizenship

Summary of both nations 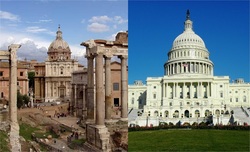 To summarize, America and Rome have many similarities, which is very understandable, seeing as America almost directly is a descendant of the Roman Empire. We have very similar laws, and especially a similar start, rebelling from a monarchical nation to create a republican government based off the freedom from tyranny and oppression. Rome created its Twelve Tables to prevent the tyranny of the upper classes upon the Plebeians, following a kind of General Strike that occurred within a few decades of the Romans expelling the Etruscans to create their Republic. America in turn created the Constitution of the United States of America following several rebellions and protests over the states being tyrants over small farmers and others in favor of the city-dwellers to the East.

Rome would become a Republic very much focused on military prowess and liberty of the upper classes and male Roman citizens, giving almost no rights to anyone outside of those groups. Women, Foreigners, and Slaves were afforded no rights of any kind, and when they were it was severely limited. But for their time, Rome was very forward thinking, and inclusive. They accepted all cultures and faiths (as long as you acknowledged Roman ones above your own) and were able to conquer much of their known world because of this.

The United States, on the other hand, went in a bit of a different direction, especially as of late. Following the last World War, Americans have had few direct threats to their power, and thus many were able to turn inwards to address internal issues once and for all. Over several decades, civil rights movements led to an America much more inclusive and accepting than ever before, giving universal suffrage to all who were citizens, and rights to many more groups than ever before. While it is still quite nationalist and militaristic, these trends have slowly faded over time, with many Americans becoming quite apathetic of political matters, which creates its own sort problems the USA will need to deal with in the future as a democratically based state.

Citizens in both were given many rights, from due process under the law to the freedom from tyranny. America took this a step further, guaranteeing the freedoms of speech, religion, press, assembly, and various others within its constitution and Bill of Rights. Rome was much more conservatively minded, and focused more on punishment than what the state could and could not do.